Earlier this year I learned about Wonderscope, the augmented reality children's reading app. The app is both fun and educational for children who enjoy playing with augmented reality. They will be amazed by the various AR storybooks, including the newest - Clio's Cosmic Quest. 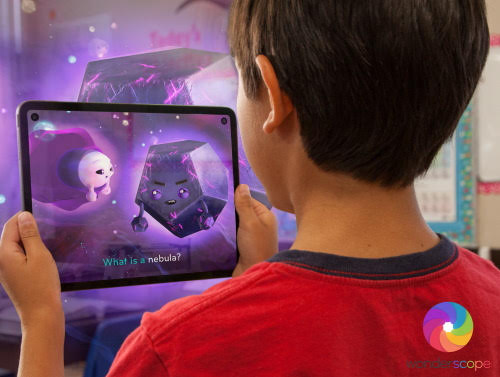 Clio's Cosmic Quest joins the Wonderscope app's growing catalog of read aloud, interactive adventures, which allow children to converse with characters and play an active role in the narrative.

In Clio's Cosmic Quest, children are invited to journey into space where they meet Clio, a tiny particle of stardust who dreams of illuminating the universe as a big, beautiful star. Tasked with helping her, kids read out loud to challenge bullies, meet the Sun and bring the nebula back together, learning facts and engaging with a fully interactive solar system along the way.

Wonderscope's library of titles, include:


More stories being released in the coming months.

AR as a Tool for Learning


Just as there are different types of learners, the essential skill of reading comes to children in different ways. Wonderscope's voice recognition system is built to understand and nurture confidence in new readers at a wide range of levels, and with different dialects and accents.

The app provides visual and aural feedback by highlighting words, and having characters make eye contact and react expressively back to the user. Clio's Cosmic Quest ends with a fully interactive bonus scene where users explore and learn more about space, planets and solar systems, developing a playful appreciation for STEM.

Wonderscope is the first AR app from Within. It was designed for iOS using Apple's ARKit. It is FREE and currently available on all AR-enabled iOS devices*.

From August 13-August 25, in time for back-to-school, all Wonderscope stories are available for $.99. Stories are regularly priced at $4.99.

Wonderscope is geared for kids 6 years and older, does not require user registration or a credit card and currently holds a 4-star rating from Common Sense Media.