When I saw the package with the "Dr. Seuss’ The Grinch" Blu-ray/ DVD, I was so excited. We really enjoyed seeing the film in theaters and looked forward to seeing it home now with all the behind the scenes bonus features.

Note: I received bluray/dvd for review purpose. Any personal views expressed are always 100% my own. 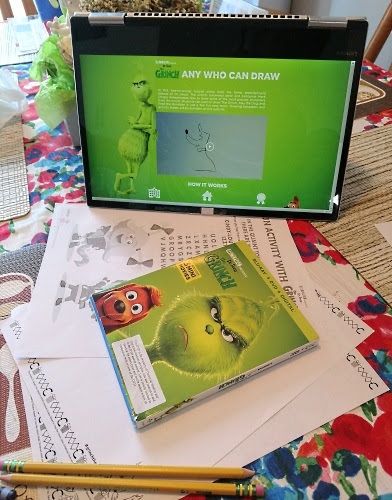 But since we had a few hours before family movie night, I thought the kids would enjoy a few "Grinchy" activities including learning how to draw a Grinch (and other characters), word puzzles and coloring sheet.

Now originally, I only planned for 3 kids but my (3rd) nephew insisted on joining in. So I handed him a coloring sheet, crayons and let him have fun.

For my son, niece and (1st) nephew, it was time to learn how to draw a Grinch. We learned lots of cool tricks while watching the video drawing tutorial on - www.anywhocandraw.com

I wasn't sure how easy the kids would be able to follow but they did well. The kids liked the side by side comparisons since it helped them with drawing their own Grinch. Soon my son and niece had both drawn their own Grinch.

My (1st) nephew had a little hard time drawing, but I suspect that because he was trying to hard to be perfect. I explained to him he could draw whatever he wanted. But because his drawing didn't look at the other kids, he wasn't happy. So we decided to switch over to the coloring sheet and he was much happier. Go figure with kids!

The kids took turns drawing, doing the puzzles and coloring. At the end each discovered what they liked best and was proud to show it off.

By then, it was time for family movie night. So we all gathered around and watched The Grinch on Blu-ray/DVD. The kids enjoyed watching The Grinch try to take over the holidays and enjoyed the movies message of friendship and being kind.

From Illumination and Universal Pictures Home Entertainment, the film is based on Dr. Seuss’ beloved tale about a cynical grouch who goes on a mission to steal Christmas from others, only to feel his own heart grow three sizes larger through unexpected friendships.

The new home entertainment edition contains more than 60 minutes of bonus content, including three mini-movies. It also includes stunning featurettes, a how-to-draw tutorial and much more.

Narrated by Grammy Award ® winner and Oscar ® nominee Pharrell Williams, Dr. Seuss’ The Grinch stars Academy Award ® nominee Benedict Cumberbatch (Dr. Strange, “Sherlock”) as the infamous Grinch, who lives a solitary life inside a cave on Mt. Crumpit with only his loyal dog, Max, for company.

The incredible voice cast includes Rashida Jones (“Parks and Recreation,” The Muppets) as Donna Who, Kenan Thompson (“Saturday Night Live”) as Bricklebaum, Cameron Seely (The Greatest Showman) as Cindy-Lou Who, and featuring legendary actress Angela Lansbury (Anastasia, Beauty and the Beast) as the mayor of Whoville.