Ralph Breaks The Internet Behind the Scenes and Review

It's been six years we since learned how to "wreck it" with Ralph and his video game friends. What has the crew been up to during that time? Not much but that's all about to change with their introduction to the "internet".

So are the changes good? Well, as with anything having to do with the internet, it depends on how you view things. 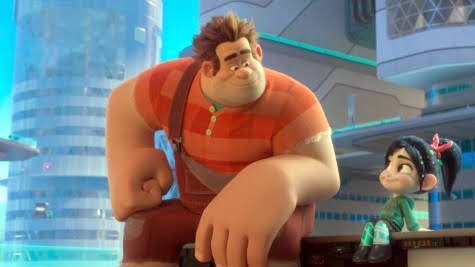 Unlike the first film, Ralph isn't really the main star in "Ralph Breaks the Internet". But he does go on a journey. A journey that's really about supporting his best friend Vanellope, who's starting to wonder about life and her future.

This kinda felt odd for me. This seemed a bit out of character for Vanellope. But these questions about "life" leads Vanellope down a road of self discovery and growth. A growth which I enjoyed seeing and felt right, once the duo are outside of their world and sorta has to grow up. 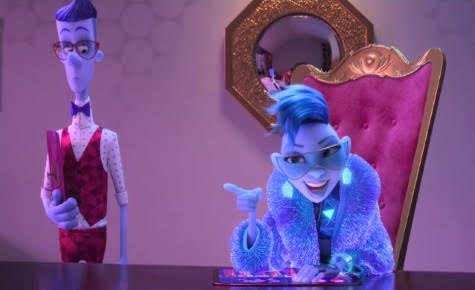 And that's another thing that felt odd for me. While "Wreck it Ralph" was all age friendly, I feel this sequel is targeted for older children tweens and up. From weird characters and moments in the "dark web" to shocking true moments on how social media can affect your self esteem to how friends can out grow each other. While not really young kid friendly, watching the duo learn how to tackle these deep social topics will be enjoyable for some.

Once you accept "Ralph Breaks the Internet" on a more older kid level, then the film does a good job of telling how Ralph and Vanellope grow their understanding of friendship and life. Truth be told, it's a good lesson for some adults also.

Since "Ralph Breaks the Internet" is offering a different view of their characters, I wanted to share some of the "behind the scene" tidbits I learned. You can also see Ralph and Vanellope enter the Internet in this “We Are The Internet” video clip.


The follow-up to 2012’s “Wreck-It Ralph” marks the first feature-length theatrical sequel from Walt Disney Animation Studios since 2000’s “Fantasia 2000,” which was a sequel to 1940’s “Fantasia.” The only other sequel in the Disney Animation on canon is 1990’s “The Rescuers Down Under.”

“Ralph Breaks the Internet” is WDAS’ firstever sequel to be created by the original film’s writing/directing team.

“Ralph and Vanellope are imperfect characters,” says Academy Award®-winning director Rich Moore (“Zootopia”), who directed the original film. “But we love them because of their flaws. Their friendship is so genuine—the chemistry between them so engaging—that I think we were all anxious to know more about these characters.”


“Ralph Breaks the Internet” takes Ralph and Vanellope to a vast, unfamiliar world with endless possibilities. When filmmakers put themselves in the characters’ shoes, they realized Ralph and Vanellope would have completely different points of view when it came to the internet. Says director Rich Moore, “They’re like a couple of smalltown kids who venture into the big city. One falls in love with the city, while the other one can’t wait to go home.”

Ralph wasn’t the only one who was overwhelmed at the idea of exploring the internet from the inside out. According to director of story Jim Reardon, the process of setting the story in the World Wide Web was intimidating at first.

“It’s still intimidating. It never stopped being intimidating. We looked at how we could make the internet relatable on a human level—like how Game Central Station on aka the power strip mirrored a train station in the first movie. In ‘Ralph Breaks the Internet,’ any person who uses the internet has a little avatar version of themselves that does their business for them.

Building the Vast World of the Internet

Technical supervisor Ernest J. Petti says that a cohesive internet world was a big challenge. “It’s the sheer scale of it with thousands of buildings and crowds and crowds of characters—the smallest crowd shots in this movie are larger than the largest ones in previous movies,” he says. “There are dynamic screens on the buildings with moving graphics. Creating a pipeline for all of that was a huge undertaking.”

“We did a lot of research to create a feeling of endlessness,” Scott Kersavage, visual effects supervisor. “Set extensions were extremely valuable. And if Ralph does indeed wreck the internet, we needed to figure out what that would look like—it’s destruction, but unlike anything we’d done before.”

Production designer Cory Loftis says, when it came to the appearance, artists moved away from physical inspirations—like the power strip in the first film—because people see the internet in terms of wireless devices and the newest apps. “They all have a similar, modern graphic design aesthetic. The look extends across almost every system now: There are rounded-off squares—very iconic and not too busy. The colors are crisp, but not necessarily primary colors—shades of cyan and magenta are more prevalent. So that formed the shape and color language of our internet.”

Filmmakers included cameos from Amazon, Instagram and Snapchat, among others, and even some international sites, which added authenticity. “People ask us all the time how we went about personifying these websites,” Moore says. “In the spirit of taking risks and wanting to make this place feel real, we just dove in.”

Adds producer Clark Spencer, “Just as we do with all of our movies, we made sure that everything we featured in the film is on the up and up and doesn’t infringe on anyone’s rights—including intellectual property rights.”

Ralph Breaks the Internet when it open in theatres on November 21. 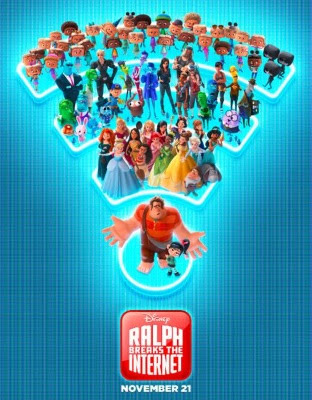 “Ralph Breaks the Internet” leaves Litwak’s video arcade behind, venturing into the uncharted, expansive and thrilling world of the internet—which may or may not survive Ralph’s wrecking. Video game bad guy Ralph (voice of John C. Reilly) and fellow misfit Vanellope von Schweetz (voice of Sarah Silverman) must risk it all by traveling to the world wide web in search of a replacement part to save Vanellope’s video game, Sugar Rush.

In way over their heads, Ralph and Vanellope rely on the citizens of the internet—the netizens—to help navigate their way, including a webite entrepreneur named Yesss (voice of Taraji P. Henson), who is the head algorithm and the heart and soul of trend-making site “BuzzzTube.”