Fans will enjoy the exciting tale of the lovable “street rat,” Aladdin (Mena Massoud), courageous and Princess Jasmine (Naomi Scott) and the larger-than-life Genie (Will Smith) now that live-action ALADDIN, is available on Digital and Movies Anywhere and soon on 4K Ultra HD, Blu-ray and DVD on September 10. 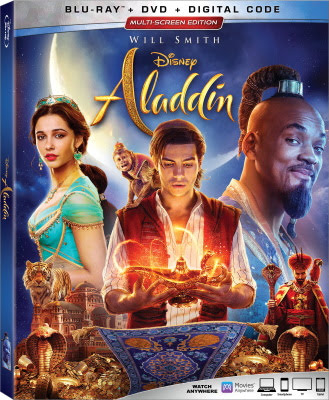 Note: I received product sample for review purpose. Any personal views expressed are always 100% my own.

The release includes all new bonus features, such as deleted scenes, a blooper reel and more extras that explore elements of “Aladdin” that audiences adore, from the film’s treasured, iconic award-winning music to its beloved characters and their hilarious antics on and off screen.

In addition, early owners of “Aladdin” gain access to exclusive bonus features. Fans who pre-purchase will receive a feature showcasing the making of the massive musical number “Prince Ali,” and those who bring home the film first on Digital will secure an exclusive extra detailing the creation of Jasmine’s new song “Speechless.”

*Bonus features may vary by retailer


“Aladdin” is directed by Guy Ritchie from a screenplay by John August and Ritchie based on Disney’s Aladdin animation screenplay by Ron Clements & John Musker and Ted Elliott & Terry Rossio.

The release of the live-action adventure coincides with the addition of the original animated classic to the highly celebrated Walt Disney Signature Collection, granting Aladdin fans everywhere the opportunity to own both magical movies. In 4K for the first time, the new release features all new bonus content, including alternate endings!