The film, Oceans: Our Blue Planet is currently screening in Digital 2D and 3D at The American Museum of Natural History until January 5, 2020. The film takes visitors on a journey to uncover a spectacular world of life beneath the waves. 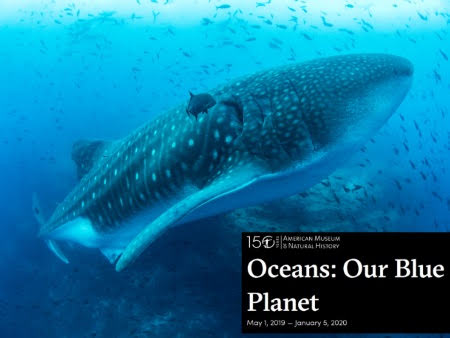 Narrated by Kate Winslet (Titanic, The Reader, Revolutionary Road), Oceans: Our Blue Planet features the OceanX research vessel Alucia. As viewers journey through the oceans, they share in these extraordinary discoveries and uncover a spectacular world of life beneath the waves.

Dolphins leap for joy through the surf at the beginning of the journey, and the first stop is the coral reefs, to meet fascinating animals like the ingenious tuskfish, which uses coral as a tool to crack open its shelled prey. Diving deeper, viewers encounter unfamiliar critters of the abyss and volcanoes of methane erupting from the ocean floor.

New ocean science and technology has allowed humans to go farther into the unknown than ever thought possible. From the coastal shallows to deeper, more mysterious worlds, Oceans: Our Blue Planet reveals the untold stories of the oceans’ most astonishing animals through amazing footage filmed at locations all over the world.

The film’s release is part of a collaboration between the American Museum of Natural History and OceanX, an initiative of the Dalio Foundation, to advance ocean research and exploration. Lead funding for the Museum’s current Unseen Oceans exhibition and educational resources is provided by OceanX.

Email ThisBlogThis!Share to TwitterShare to FacebookShare to Pinterest
Labels: Outings